Planning a trip to BC - Canadian Rockies - Alberta 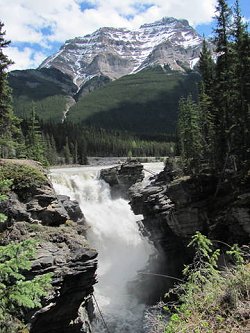 Depending on a mobile phone while traveling between the larger towns and cities in the BC and Alberta interior is risky, especially on the Icefields Parkway, Hwy 93. Often there is simply no service available - for most of the day. Thus you can't rely on using your phone's GPS as a map. So be sure to either bring or buy one once you arrive in Calgary or Vancouver. Picking up the local free maps and brochures at each hotel or visitor info centre is also a great idea.

Beauty is in the eye of the beholder, so whenever you see a scenic vista, if it's safe to pull off the road and take a picture, you should. Plus there are many official viewpoint areas, normally marked with a road sign, only moments from where they recommend you pull over and stop.

While in Provincial or National Parks, animals are protected from hunters, but those armed with only camera's must keep well back. This is why telephoto lens were created. If you are not in a park, you must still be cautious if you encounter any wildlife.

Do not get out of your car or bus if animals are around and certainly never feed them. If you should encounter an 'animal traffic jam,' be sure to be aware of vehicles coming up behind you; best to pull completely off the traveled portion of the road - if stopping to take a picture.

Mt. Robson, the highest peak in the
Canadian Rockies

Whether your starting out in Vancouver BC, Calgary Alberta or Seattle Washington, there are many ways you can travel to or from the Canadian Rockies. The more time and money you have, the better the trip.

To keep this reasonably simple, let's say your starting point is in Vancouver. A good map of BC and Alberta will be helpful for the following...

Vancouver to Whistler then north to the BC interior? Or leave Vancouver heading east to Hope and the interior? We'll explore both routes.

Vancouver to Whistler, about a two-hour drive along the Sea To Sky Highway 99, which is about 120 kilometers or 75 miles north.

Possible stops along the way: 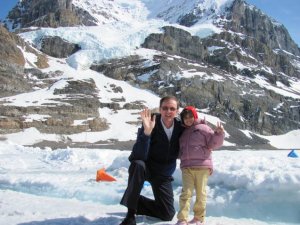 Jeff & a friend on the
Athabasca Glacier, Columbia Icefield

Perhaps your going to spend a few hours in Whistler, or the night. Eventually you can keep heading north along Hwy 99 to the town of Pemberton, then onto the Duffy Lake road which leads to Lillooet. From Lillooet Hwy 99 continues to Hwy 97 at the Hat Creek Ranch, just north of Cache Creek - which is located at Hwy 97 and the Trans Canada Hwy 1.

From Hwy 97 at the Hat Creek Ranch, you could head north to Hwy 24, near 100 Mile House, east on Hwy 24 to Hwy 5 at Little Fort. From there, north on Hwy 5 past Clearwater, Blue River and Valemount to Hwy 16 at Tete Jaune Cache.

However at 100 Mile House you could keep going north to the towns of Williams Lake, Quesnel and Prince George. Just east of Quesnel is the historic gold rush town of Barkerville (barkerville.ca).

From Prince George you could travel east along Hwy 16 to Tete Jaune Cache, Mt. Robson (the highest peak in the Canadian Rockies) and into Alberta, Jasper National Park and Jasper itself.

At Cache Creek, on Hwy 97 and Hwy 1, you could follow Hwy 1 east to Kamloops. At Kamloops Hwy 1 continues east to Salmon Arm, Three Valley Gap, Revelstoke, Rogers Pass, Golden, Field, then cross into Alberta and a few minutes later you are at Lake Louise. Lake Louise and Banff are about 45 minutes apart. East of Banff is Canmore, then Calgary (Calgary and Banff are about 90 minutes apart, also along Hwy 1).

Following the Trans Canada Hwy number 1 east to the town of Hope, about 2 hours away.

The main street in Hope is Wallace (at 4th Ave) which features plenty of wonderful wood carvings by artist Pete Ryan. Hope is the junction of Hwy 1, 3 and 5. The more scenic route to Kamloops is to follow Hwy 1 through the Fraser and Thompson Canyons. This adds about an hour of driving time, but it's well worth it. Stops along the way include Hells Gate (hellsgateairtram.com), plus Lytton - where the Thompson River meets the Fraser River. From Lytton you'll come to the Ashcroft Manor, Cache Creek and could then continue on Hwy 1 to Kamloops. 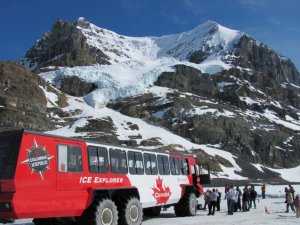 From Hope, you could also following Hwy 5, the Coquihalla (coke-a-halla) to Merritt. At Merritt north leads you to Kamloops, or east along Hwy 97C to Kelowna and the Okanagan Valley. From there you could pass through Vernon and make connections to Kamloops, or rejoin Hwy 1 and continue east to Three Valley Gap, Revelstoke, Rogers Pass, Golden, Field, then cross into Alberta, Lake Louise, Banff, Canmore and Calgary.

Also from Hope, following Hwy 3 would take you to Princeton, Osoyoos or Penticton and Kelowna, or from Osoyoos east to Grand Forks, Nelson, Cranbrook and get into Banff via Hwy 93 and Hwy 1.

1) From Vancouver take the Trans Canada Hwy 1 east to Hope, then Hwy 5 to Merritt and Kamloops. Continue on Hwy 5 north to Clearwater and Valemount BC. Valemount is a good place to stop for the night.

From Jasper head south down the Icefields Parkway, Hwy 93, rejoin Hwy 1 just outside of Lake Louise. Overnight in Lake Louise or continue another 45 minutes to Banff. Overnight in Banff at least 2 nights, longer if you can. Later get back onto Hwy 1 heading east to Calgary, about 90 minutes away. Calgary is worth at least a one night stay if time permits.

2) From Vancouver take the Trans Canada Hwy 1 to Hope, then Hwy 5 to Merritt and either head to Kamloops or to Kelowna. Either route leads back to Hwy 1 and continue east to Three Valley Gap (3valley.com), Revelstoke, Rogers Pass, Golden, Field, then cross into Alberta, Banff National Park, Lake Louise, Banff and Calgary. A side trip up and down the Icefields Parkway Hwy 93 is a must.

On the way to the Rockies, Kelowna, Three Valley Gap and Golden are just three of the possibilities to overnight.

Possible Stops Along The Way 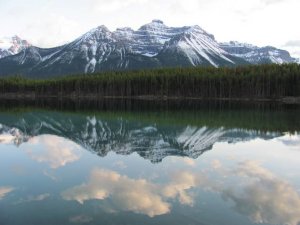 The Rockies Along The Icefields Parkway Hwy 93

View points galore the entire drive, be sure to pull completely off the traveled portion of the road, do not get out of your car or bus if animals are around and certainly never feed them. 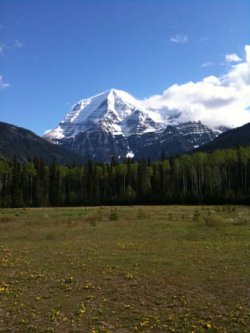 Mt. Robson, the highest peak
in the Canadian Rockies

Jasper is the smaller of the two main towns in the Rockies and is located about 4 hours drive from Edmonton. Banff is located on the Trans Canada Highway and is only about 90 minutes from Calgary. Hence Banff is a bit larger - and has more sights and visitors.

The main street in Jasper is Connaught Ave, although Patricia Street, one block away, has many shops and restaurants as well. During most of the year business's are open late - many till 9, 10 or 11 pm.

Walking, hiking and biking trails are found everywhere, but it's especially popular in the Canadian Rockies. Perhaps a river rafting trip would be exciting, and there are a few companies who offer this adventure. For many a trip on the Jasper Tramway on a clear day is a high priority. The view is stunning.

The top highlight is a drive down Maligne (ma-lean) Lake Road to visit the Maligne Canyon, Medicine Lake and the large and scenic Maligne Lake. From Jasper head east on Hwy 16 only 5 kms or 3 miles, then make a right turn onto the old steel bridge - which crosses the Athabasca River. As the Maligne Lake Road is only 44 kms or 28 miles, and has no exit, it's less traveled and presents a good chance of seeing wildlife. From May or June till early October there is a must-see 90-minute boat tour from the edge of Maligne Lake. A gift shop and cafe is also located here. On the way back, make a side-trip onto the grounds of the Fairmont Jasper Park Lodge. Visitors are welcome to visit the main building with it's shops, lounge and restaurant.

Located only a moment from the Trans Canada Highway #1 is a small village of shops, services and a Parks Canada Info Centre and museum.

A short drive up the hill leads to either Lake Louise, or Moraine Lake and the Valley of the Ten Peaks. If time is no object, both are well worth a visit. If you get to Moraine Lake, be sure to follow the footpath up to the top of the "rock-pile" for a stunning view of the lake and surrounding peaks. Watch your step and do take your time on the way up - and down. Beside Lake Louise is the Fairmont Chateau Lake Louise Hotel. By all means, step inside for a look. 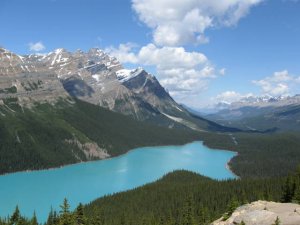 As mentioned above, Banff is larger than Jasper, and has more sightseeing venues - plus many more visitors.

The main street in Banff is Banff Ave, although in the downtown area, there are many other side streets that have shops and restaurants as well. During most of the year business's are open late - most till 9, 10 or 11 pm.

While many visit the Banff Gondola on Sulphur Mountain, be sure to also visit the Cave and Basin National Historic Site, the Fairmont Banff Springs Hotel, Bow Falls, Surprise Corner, the Hoodoo's, the Whyte Museum, the Parks Museum, the former Luxton Museum, and if time permits drive by Two Jack Lake and Lake Minnewanka.

Just outside of Banff, located on Hwy 1A, is the Bow Valley Parkway which is a slower yet scenic route that you can take between Lake Louise Village and Banff. A favorite stop along the way is at the Johnston Canyon - with a walk to the lower falls. A small gift shop and cafe is located at the entrance.

There are two seasons in western Canada - winter and road construction! Due to possible delays, it is advisable to visit www.drivebc.ca for BC and 511.alberta.ca for Alberta road conditions.