Planning a Trip to Victoria and Vancouver Island 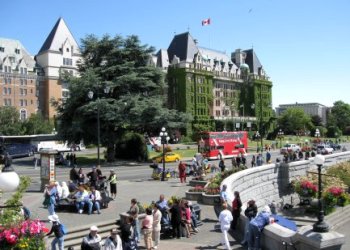 This page is designed to help those first time individual visitors or those planning to bring a group to see Victoria, the capitol of British Columbia.

Most of the sightseeing companies take their customers to the following Victoria attractions:

A BC Ferry ride through some of the Gulf Islands en-route to Vancouver Island, the world famous Butchart Gardens, the scenic shoreline drive into Victoria, Downtown (including the inner harbour), the Fairmont Empress Hotel, the BC Parliament Buildings, Government Street Shops and historic Chinatown.

How A Day-Trip To Victoria By Bus Usually Works

Departing from Vancouver by tour coach, usually by 7:30 am, they head south on Hwy's 99 & 17 to the Tsawwassen (sa-wass-en) BC Ferry Terminal in Delta BC. Buses must arrive at least 30-minutes ahead of their scheduled ferry sailing. The ships sail every hour from about the start of June to about mid-September, starting at 6 am to 10 pm, from both the Tsawwassen and Swartz Bay terminals. From about mid-September to the start of June, the ships sail every 2nd hour from 7 am to 9 pm. Extra sailings are scheduled on long-holiday weekends. Double check this with BC Ferries.

The bus, with the passengers on board, drives right onto the ship, then passengers go up to various decks which have food services, a gift shop, washrooms and sitting areas both inside and outside. The crossing time between the mainland and Vancouver Island, and visa versa, is about 1 hour and 35 minutes. The distance traveled is about 25-miles or 40 kms.

The ferries do not actually arrive in Victoria, they arrive in Swartz Bay, about a 25-minute drive from Victoria. Once you arrive at Swartz Bay, some choose to go to Butchart Gardens first, then either take the shoreline drive tour into Victoria, or simply head straight downtown. Others choose to go straight to the scenic shoreline drive, then downtown, or right into downtown for free time, then to Butchart Gardens and onto Swartz Bay.

The minimum amount of time spent at Butchart Gardens from May to October should be 90-minutes to two-hours. There are food services, washrooms and a gift shop on the 55-acre site.

Once downtown, the passengers usually have about 2-hours of free time, sometimes more, depending on the return ferry reservation. Downtown Victoria and the harbour is considerably smaller than downtown Vancouver, but it's very charming with it's 'olde England' feeling. 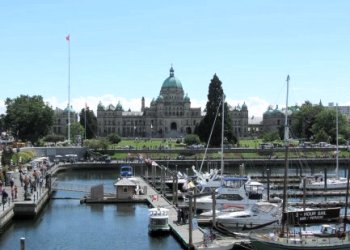 Flying One Way? Or Both Ways?

Going To Seattle Then To Vancouver And Victoria BC?

If you are starting your Pacific Northwest journey in Seattle Washington, then planning to come to Vancouver - and then go to Victoria, you could actually head to Victoria first, out of downtown Seattle on the passenger-only 'Victoria Clipper'. Travel time is about 2 hours. There are also ferries out of Port Angeles and Anacortes Washington, which either head into downtown Victoria or close to it - at Sidney BC. The sailing times are about 90 minutes.

If your group is already in Seattle with your own tour bus, you could still put your passengers on the Victoria Clipper, arrange for a local tour bus to the Butchart Gardens, then drop your passengers at the Swartz Bay BC Ferry Terminal. Everyone could then walk on - and off - as foot passengers, and at Tsawwassen pick-up your own tour bus. This would save the cost of putting your bus on two-ferry sailings.